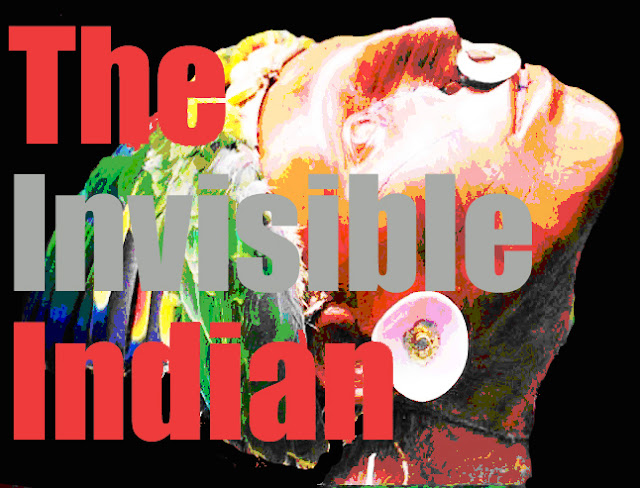 Unknowingly, we may be contributing to
“Paper Genocide”* ...
*The method of writing American Indians out of history.


This also has contributed to a phenomenon that I call,  The “Invisible Indian.”
©2018 Michael Auld

“Out of sight, out of mind” has been the mantra associated with an irreplaceable neglected culture, the American Indian. This current state of ignorance about the real founders of our country is not shared by all Americans. I have encountered many folks who attend Native festivals and powwows with their children to get first-hand knowledge about indigenous Amerindian cultures. These many festive gatherings provide a brief insight into contemporary Native Americans, functioning in today's work world, who don their tribal regalia to honor their ancestors.

Although these powwow settings are very helpful, it is my experience that additional research into Amerindian cultures is mandatory. A case in point; When politicians can assail and cage Amerindians from southern countries with impunity, this is an example of  a lack of knowledge about the victim's ties to this hemisphere.

PERSONAL EXPERIENCE
I arrived in Washington, DC in 1962 to pursue advanced degrees. As a foreign student, my knowledge of Native Americans was from distorted Hollywood movies. I met the first Native American on Howard University's campus. She told me that she was Pamunkey. The Pamunkey was the leading nation in the extensive 32-34 nation Powhatan Confederacy (Powhatan nations could be composed of many villages yet referred to by the diminutive designation as a "tribe" or "band").

I was introduced to a part of American society whose members were survivors from the historic Powhatan Confederacy. The curious thing was that none of her fellow students or professors knew about her Native American ethnicity. Since that time of President Kennedy only one American president (Barack Obama) consistently mentioned Native Americans in his speeches.

Instead of protecting Native Americans, the quiet destruction of the Bureau of Indian Affairs (BIA) by the current administration is ongoing. For survival purposes, some departments of the agency have contingency plans for survival. In his private casino life Trump had seen Native Americans as the enemy of his gambling concerns.


At 19 years old with a British education in a Jamaican colonial school system, students knew more about European history than we did about our Caribbean homeland. Although the name of our island was derived from "Yamaye", named for the indigenous Yamaye Taino, I was taught zero about these Amerindians of our hemisphere. Yet, our Caribbean British colonial masters had, themselves, no clue about Amerindian cultural history. Wrapped up in themselves, the British were never curious to learn where they were. I had no interest of living in England yet, I was taught mostly about British history. Learning about our hemisphere became a later personal quest. Over 50 years later after my arrival in the USA, also once a British Colony, little or nothing has changed in America’s educational approach to Native history. Most Americans know more about Henry VIII, Queen Elizabeth and Prince Harry than we do about one of America’s major founders, Powhatan II who in his lifetime was considered a king by the English

Because of a deep “National guilt” about Native American genocide, (most notably perpetrated by President Andrew Jackson's "Indian Removal Act") the plight of the American Indian has retained its “invisibility” status in our national discourse.

Q: How many Native Americans or Amerindians do you personally know?
(P.S. They may also be called "Hispanic" since most arrivals from south of the border have high percentages of Amerindian DNA.)

Q: Do you know your own Amerindian blood quantum?

Or do you suspect that you may have some Native “blood”?

Q; Are the Powhatan nations extinct?


Solving the Native invisibility issue requires concerted efforts by concerned individuals and parents to encourage educators and School Boards to provide students with more in-depth Native American studies. Also because of the impact of the "Columbian Encounter"of 1492, in the creation of countries in the Americas, knowledge of the Caribbean's Taino civilizations is a must. (The first European impression of the Americas was, for them, a "New World". This 1492 Encounter with the Taino and "Island Carib" civilizations enabled the Spanish and other Europeans the ability to survive in this ancient "Terrestrial Paradise".)

This broader approach to our education should also include examinations of the Mesoamerican Empires and Civilizations of Central America and Peru. After all, these studies should be as important to us in this Western Hemisphere as the studies of Greece, Rome, Egypt, Mesopotamia and China are to Europeans and others in their Eastern Hemisphere. We should become more knowledgeable of our own hemisphere. Allowing the Amerindian to continue to be invisible adds to their cultural demise.

A cautionary note: Europeans in the Americas are overly interested in Mesoamerican human blood sacrifices. In teaching about Mesoamericans, less emphasis should be placed on this religious activity. Emphasis on Amerindian sacrifice is a way of diminishing Amerindian cultural and technical advancements. There is a need to look in the mirror.

As for Judaeo-Christian sacrifice... After all, human sacrifice and the ritual "drinking of Christ's blood and the eating of his flesh" are not taught by Christians as a form of ritual cannibalism. Beheading and torture in Europe are not usually emphasized in the teaching of European history.

Suggested Reading:
To understand our ancient Amerindian hemisphere adults should read the book "1491: New Revelations of the Americas Before Columbus" by Charles C. Mann 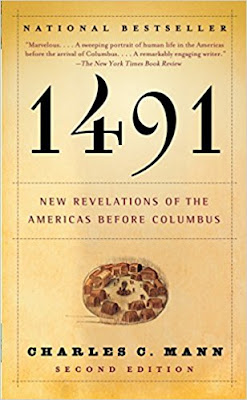 Invisibility issues are compounded by the "Hidden Indian" syndrome.


A "Hidden Indian" is a person who may or may not know their actual tribal ancestry. Some prefer to pass as white or black depending on economics or a fear of shunning within their adopted white or black group. The tribal identity that they often choose is Cherokee. This is simply because of the loss of tribal contact during America's assimilation period. (Mainly after the Civil War.)

Over the years as a vendor at powwows, I have met some brave attendees with the desire to reconnect with their Native roots. Another issue within current Native America (at least on the East Coast) is a desire to not abandon their African roots while embracing their Native heritage. They sometimes call themselves "Black Indians".

Granted, each American Indian nation has its own US Federal Government coerced blood quantum criteria for tribal membership. So, being of Native descent through DNA is more widespread than the census could imagine. Many Natives with varying degrees of blood quantum, don't know their tribal affiliation and may belong to the "Hidden Indian" category. In families, here and in Brazil, three family siblings can identify as black, white or Indian.

During the centuries old dispersal of Native peoples throughout the continent, as well as the application of the *Racial Integrity Act of 1924, many Natives lost track in the ethnic mix within the American society because of  socially "blending in", or denying that they were Indian. Many passed over into the "white" or "colored" communities to survive the dictates of racially divided neighborhoods, some succumbed to the Racial Integrity Act, or assimilated for purely economic reasons. Remember, in America it was better to be white or black than it was to be a disposable Indian. These racial choices can be political, physical, pride based or because of peer pressure. For example, in the Black community pressure to conform to the racist "One Drop Theory" by the "race police" is often worded this way, "What? You sayin', ...you not Black?" is as common condemning refrain.


We must do the research that was denied us during our early education.

* The Racial Integrity Act of 1924 was conceived by Dr. Walter A. Plecker of Richmond, Virginia, a member of the racist Eugenics Movement. It stated that America was composed of two races, the black and the white race.

Unfortunately most people are oblivious to Native American history. This is not their fault. Conquerors rarely taught indigenous history and the impact that these Indigenous cultures had in the creation of our homelands. The historical truth was that Spanish and English colonial aims were to eradicate and replace indigenous Amerindian cultures with their own. Nothing is more obvious than in South and Central America where rabid Spanish priests tore down the Amerindian religious temples to build Catholic cathedrals over them. They even gathered and burn Amerindian books as "Works of the Devil!". The theory was to eradicate the Indian and make him or her a manageable Christian.

For example: On our continent, the English and their successors, the Americans, rarely taught about the Powhatan Confederacy and its role in the founding of America. Instead, we are saturated with the cartoon images of a minor Powhatan II daughter, Pocahontas, a bigamist Pamunkey young woman who was a victim of Stockholm Syndrome. (When a captive begins to identify with the captors.) Patty Hurst is a good contemporary example. Most people within driving distance are shocked to learn that the oldest American Indian Reservation, the Pamunkey (Pocahontas' tribe) is 30 miles East of Virginia's amusement park, Kings Dominion on I95.

A MONUMENT TO POWHATAN II?

ALSO: How can we forget the Amerindian holocaust that began in the 15th century?

The question about this historic event has rarely been a part of our educational curricula. As above, the invisibility issue is a case of "Out of sight, out of mind." This phenomenon continues today with the offhandedly dismissal of the plights of the descendants of the victims of this planet's greatest human holocaust.