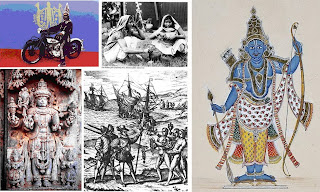 Indio n, Spanish. "Indio" means Indian, as in Native American. The more politically correct word in Spanish is indígena, but indio is also used, just like Indian in English.
Hindú /hindoo/ n, via Urdu to mid 17th century Persian (pronounced in-doo in Spanish) Indian from the country of India.
Dravidian n, Possibly the first people who became “Indian”. According to a view put forward by geneticist Luigi Luca Cavalli-Sforza in the book The History and Geography of Human Genes, the Dravidians were preceded in the subcontinent [of India] by an Austro-Asiatic people, and were followed by Indo-European-speaking migrants sometime later.
Indian n, from Sanskrit sinduh, via Old Persian Hindu “Indus” [River]: 1. A native of the subcontinent of India. 2. Applied to the native inhabitants of the Americas from at least 1553, on the notion that America was the eastern end of Asia.
“India”n More accurately Bharat, Bharata, Bhārat, or Bhārata may be a transliteration of either Bharata (Sanskrit: भरत, lit. "to be maintained") or Bhārata भारत, lit. "descended from Bharata") and may refer to: “Originating from Bharata, brother of the god Lord Rama.”

Given the above explanation of the name “India”, the people from that subcontinent do not necessarily refer to themselves by the Persian word “Indian” from “people of the Indus River”. They use their own religiously associated Sanaskrit word, “Bhaarat” to refer to themselves.


Many of the popularly held notions about the Americas began in the Caribbean with the Columbian Encounter of 1492. The most basic retention after meeting the Taíno in the Bahamas was that they were Indians in an extension of Asia. To Columbus, they were, in color, like the Afro-European mixed people of the Canary Islands, a Spanish possession off the West Coast of Africa. The English, coined the use of “Red Indians”, a designation that differentiated this ethnic group from the “other” Indians of India.
Growing up in the Caribbean, most people love to watch World Cup cricket played between, among others, India, Pakistan and the West Indies. Who then is the real Indian? In this hemisphere, this dilemma of cultural misidentification began with Columbus. The term became entrenched with the 16th century Spanish who created “a Juzgado de Indias or judicial zone [of the Indians/Indies] that was established in the [Canary] islands in 1566” to control trade with the Americas. We tend to blame Columbus for this dilemma, yet come to think if it maybe he did run into “the eastern end of Asia” in 1492.
Asia Extended
Asia [from the Greek name for] “the world's largest and most populous continent, located primarily in the eastern and northern hemispheres. It covers 8.6% of the Earth's total surface area (or 29.9% of its land area) and with approximately 4 billion people, it hosts 60% of the world's current human population.” Wikipedia
Mix up the world’s population and every 3rd human you meet would be Chinese. Every 5th person would be from India. The rest of the continent includes millions more of other Asians in East Asia and the Pacific.
Added to these Asians, approximately 47,834,251,490 indigenous people who are genetically “Asiatic”, live in 16 countries in South and Central America. There are roughly 3,672,790 in the USA and Canada. These overall numbers do not include the indigenous Caribbean populations or the extremely large meztizo and other African, European and Asiatic populations with indigenous American genes in this hemisphere. Even Europe (and possibly other areas) had its mixing of indigenous Americans soon after Columbus brought some Taíno back to Spain. Some meztizos in the Americas obviously relocated to their father’s homelands in Europe and Africa (For example, Jamaican Maroons to Sierra Leone and African Americans to Liberia).
Is the vast Western Hemisphere of the Americas also a part of Asia? Some folks think so. However, not according to some writers. Yet, indigenous Americans, they contend, are believed to have come “from Asia over a land bridge that connected both Asia proper and the Americas.” Indigenous Americans, at the time of Columbus, were genetically, philosophically and religiously “Asiatic”. Columbus was on his way to Asia when he collided into the Caribbean homeland of these Asiatic peoples, the Taíno and Island Carib. To him, they appeared to be Indios. Sailing down from the Guanahani in the Bahamas, he arrived in Cuba. There he sent out an overland expedition to find the home of the Great Kahn of China. Until his dying day, maybe he was rightfully convinced that he had encountered, explored and temporarily governed Indians (Indios) from the outer reaches of Asia’s subcontinent.
Who are the real Indians?
“East Indian” is not seen as a positive term by some people indigenous to the subcontinent of India. A close family friend, who is from India, lamented that the word “Indian” should only apply to their people, is a frequent refrain heard among “true Indians”. “Native Americans are not Indians”. Some Indians, like members of the Goins family (from Goans) originated from Goa, India and married into Virginia’s Native American families as early as the 1700s.
The 1492 misnaming of peoples in an entire hemisphere is very confusing. They can be called “American Indian”, “Native American” “Amerindian”, or “Indigenous Americans”. Even the word “America” may be troubling since it was coined from an Italian named Amerigo Vespucci, an Italian man who never set foot in the Americas. The indigenous people of the Americas had as many names for themselves and their territories as they had languages. The people whom Columbus met in 1492, called themselves “Taíno”, which appropriately meant the “Good” or “Noble” people, a self-identifying concept that eluded both the Spanish and Columbus. The Island Caribs, another indigenous Caribbean group, were appropriately called the “Strong Men” by the Taíno.
Although Columbus was responsible for the first Caribbean misnomer, the other being Caribbean people as “cannibals”, he was highly overrated as a “discoverer”. Many have now come to believe that, for indigenous peoples of the Americas, Columbus’ “discovery” of a “New World” was dismissive. The Spanish now distinguish between the indigenous people of India and the Americas in the following way. Indu (in-doo) = the real Indian. Indio (in-di-oh) = Indigenous Americans. Today, when we call over the telephone for technical help with our computer, we often get a real Indian on the other end of the line. Maybe we are talking to people who are more “local” than we think. Remembering the invention of gunpowder, trigonometry, etc., etc., what makes it equally interesting is that both they and the Chinese are well on their way to dominating the known world…AGAIN!

NOTE: The Names They Call Us
Some tribal names that Indigenous Americans traditionally call themselves and what their rivals called then are: