Why would anyone think negatively about "Mexicans"?

Current and past attitudes of the People of the Wall towards our neighbors south of the border reached a fever pitch by Trump followers during the 2016 election campaign. This group of fearful people consisted mostly of Anglos and their fellow supporters whose knowledge of history is derived from the indoctrination of a Greco-Roman model of "civilization." This model is the basis of both the Anglo and our "Western" educational systems.

Not bad in itself, the ethnocentrism that follows the Greco-Roman model overlooks the societal achievements of other world civilizations. For example, the Precolumbian Americas were cut off from the Egyptian and *Mesopotamian foundations upon which the Greek and Roman models were built. Most Amerindian wonders that the Anglos encountered seem to have mostly developed independent of "Old World" influences. This is true, of course, if one believes in a no-contact-theory between both hemispheres prior to the arrival of Columbus.


*Ancient Mesopotamia included today's Iraq, Kuwait, eastern parts of Syria, Southeastern Turkey, and regions along the Turkish-Syrian and Iran-Iraq borders. While Egypt is an African country.

What of Ancient Mexico?

"Ancient Mexico can be said to have produced five major civilizations: the Olmec, Maya, Teotihuacan, Toltec, and Aztec [or Mexica]." --Wikipedia

Also: The language spoken by the Aztec is *Uto-Aztecan (*related to Ute and the American state, Utah), while the legendary location of the origin of the their people was Aztlán. "Either in northwestern Mexico or the southwest US." Many other indigenous people and their languages survive in Mexico and are protected by the Mexican government.

*[Note: The Aztec originated from "along the border between the United States and Mexico, perhaps in the area of Arizona and New Mexico."]
In the 1800s, as a result of war and purchase, while Mexico was shrinking, while the United States of America was expanding west from its Eastern states. The mostly Anglo country gobbled up six large Mexican states of La California, Colorado, Utah, Texas, Arizona and New Mexico. Old Mexico consisted of massive populations of Indigenous Americans called "Indios" some of whom came from the Anglo-occupied US. Along with large Amerindian populations, Mexico is composed of mestizos who may or may not have Indio ancestry, Spanish, some Africans and a variety of Middleastern and Asian immigrants. The most dominant genetic markers are probably Amerindian. Mexico, although predominantly mestizo, by blood or affiliation, no longer classifies its complex, mostly mixed  populations by race. A term in current use is "La Raza". In Latin America, La Raza may mean "race" or "people" especially with Amerindian or mestizo ancestry. "The term originated in the 1925 book, La Raza Cósmica (English: The Cosmic Race) by the Mexican writer José Vasconcelos."--Wikipedia

Mexico had a checkered history of racial and class peculiarities that were more pronounced but changed over the centuries. A look at one census illustrates what was true for the times.

Today, the greatly reduced sized country called Mexico was born out of conquest of the last of its ancient empires, the Aztec. This Mexica (may-she-kah) civilization (1300-1521) was built on the early cultural accomplishments that, in many instances, surpassed those of the invading Conquistadors who themselves were later arrivals to the earmarks of "civilization". These Spanish invaders were heir to Arab and Greco-Roman civilizations and could not appreciate the Amerindian form of cultural achievements recorded by some Catholic priests. "Mexico" had existed as complex societies for three thousand years before the arrival of the Spanish in 1519. They were later ruled by Spain for only three hundred years.

Mexico City has remained the largest city in the Americas with the greatest number of surviving Native languages. However, as it has been seen around the world, the indigenous people were quickly similarly demoted to the bottom rung of Mexican society. The fact that the Aztec speak a Uto-Aztecan language and said that they came to the area they now occupy in Mexico City, means that their mythology of origin is correct. That extensive area of origin in the modern US before partition caused by the Mexican-American War, was called Nothern Mexico.

In Mexico, many wars of resistance were waged in most of the territories from the Maya in the Yucatan to the Comanches, Apaches and Navajos in the swath of territory called "Los Californios". Unfortunately, a large portion of the American public does not know much about Mexico's cultural history or its tortuous past with the US Government. (See https://en.m.wikipedia.org/wiki/Mexican–American_War#Roots_of_the_conflict_in_Northern_Mexico)

Many people who crossed or are crossing the southern US border, although not all, but were considered to be Mexicans in the past. They have been portrayed as menial workers. Recent wars and social unrest in Guatemala and El Salvador have forced refugees to also seek safety across the southern US border. The people who make the trek bring profound heritages and bloodlines of the indigenous Amerindians, *Californios and Africans, among others.

*Californios included the descendants of agricultural settlers and retired escort soldiers deployed from what is modern-day Mexico. Most were of mixed ethnicities, usually Mestizo (Spanish and Native American) or mixed African-American and Indian backgrounds. Despite the depictions of the popular shows like Zorro, few Californios were of "pure" Spanish (Peninsular or Criollo) ancestry. Most with unmixed Spanish ancestry were Franciscan priests, along with career government officials and military officers who did not remain in California.
--Wikipedia


What do Americans know about Mexico? Some obviously have visited south of the border for many reasons. In my case, my visit to Mexico was mostly educational. I had been previously aware of its ancient historical achievenents. Getting a first hand view of outstanding accomplishments was even more impressive. My wife and I visited three diverse regions of the Yucatan, Mexico City and Cuernavaca, (the Land of Eternal Spring) in the mountains. Three of our grandchildren have a Mexican mother whose birthplace is Cuernavaca, a resort town at 5,060 feet above sea level, and is the capital of the state of Morelos. Morelos is the birthplace of the Mexican Revolutionary hero, Emiliano Zapata.

The Yucatan with its Chichen Itza and other temple pyramids, sprawling cities, as well as gigantic governmental buildings, magnificent sculptures, and  walled, ancient rubber-ball courts, is in Maya territory. Mexico City is the largest metropolitan area in the Western Hemisphere and is considered the oldest city in the Americas. It was originally built as an Amerindian city by the Aztec (Mexica) and called Tenochtitlan. Tenochtitlan was constructed on a built-up island in Lake Texcoco. My favorite structure in Mexico City is the beautiful National Museum of Anthropology and History, a large building containing magnificent Mezoamerican artifacts.

A few years ago, my wife and I visited Mexico's Yucatan region. The pyramid of Chichen Itza was advertised as a highlight of Mexico, since it is one of the world's outstanding marvels. The Precolumbian city that extended into the surrounding forested lowland, far exceeded my imagination. The Maya Civilization is only one of the many high levels of achievements found in our Mexican neighbors to the south. The descendants of the Maya, Olmec, Mexica, Zapotec, and Toltec (just to name a few of their outstanding Mexican ancestors) have often been despised by past, and current leaders of America. The irony of today's attitudes of the present administration is not new. It is a reflection of times from the Mexican-American War of the 19th century through the Great Depression of the 20th century to the 21st century when Donald Trump decided that his supporters needed a revival of Mexican scapegoats.

Trump is not indigenous to the Americas. He is descended from German and Scottish foreigners who sought a better life than that offered by their ancestor's European homelands. Most of the people whom he is scapegoating are indigenous to this hemisphere. What comparative civilized achievements did the ancestors of Trump's chosen scapegoats achieve? One example of Mexican exceptionalism speaks for itself:


Chichen Itza
CHEE-chen EET-sə; from Yucatec Maya: Chi'ch'èen Ìitsha' [tɕʰiʔtɕʼèːn ìːtsʰaʔ] ("at the mouth of the well of the Itza people") was a large pre-Columbian city built by the Maya people of the Terminal Classic period.
Chichen Itza was a major focal point in the Northern Maya Lowlands from the Late Classic (c. AD 600–900) through the Terminal Classic (c. AD 800–900) and into the early portion of the Postclassic period (c. AD 900–1200).--Wikipedia 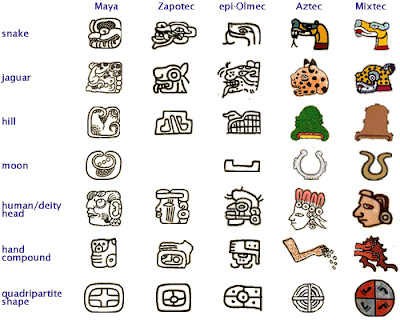 Writing is often used as a method of classifying a society's achievements. It is usually learned from previous or neighboring civilization. For example, our alphabet resulted from a series of borrowed pictures that changed from one culture to the next. Our letter "A", when turned upside down meant food and was originally a drawing of the head of a bull. It was called "alef" and was then turned on its side to its current position, meaning "alpha". "B" was on it's flat side and represented a house, or "beth". It became the Greek beta. Both letters combined to be the source of our word "alphabet".

Mesoamerican writing, independently of Eastern Hemisphere influences, developed very early and was practiced by many Mexican civilizations. Writing was often incorporated in art. In contrast, Western writing systems were created from Africa's Egyptian civilization. Dr. Ivan Van Sertima's book, "They Came Before Columbus", espoused the theory of Precolumbian African interaction with the Amerindians as evidenced in the facial features of the Olmec rulers. The theory was that some faces revealed an Afro-Amerindian ethnic mix.