These are events in the adventures of a young Spider-Boy which begin in "Ticky-Ticky's Quest", which is Part 1 of a trilogy. He is a determined 12-year-old daydreamer attending a Jamaican boy's school. In this first story, Ticky-Ticky is forced by the strict British headmaster to bring his missing father, the infamous folkloric Anansi the Spider-Man, to school.

Find out about Ticky-Ticky's encounter with Guabancex, the hurakan (or hurricane). Yearly, she comes to the Caribbean, Central, and North America’s Eastern Woodland’s Coast, all the way up from Florida to Massachusetts.  However, she is misnamed by meteorologists who give her non-Amerindian names! This is why she remains angry!

Above is Guabancex, The Angry Woman Wind Goddess known as the Hurakan, riding GuatauBA, her herald who announces her pending arrival, and his twin brother Coatrisque the Deluge or the hurricane's Surge which follows her. She is forming in the Atlantic again as we speak! But meteorologists are calling her out of her name, They now call her "Fiona", and then to add insult to injury, they now use a Scottish man's name, "Ian"! ... Shiish! What's next?

Let’s get it straight. 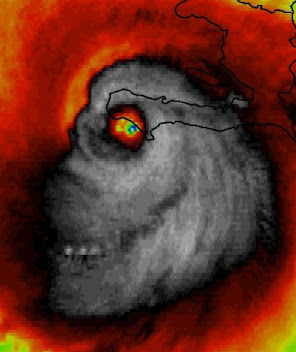 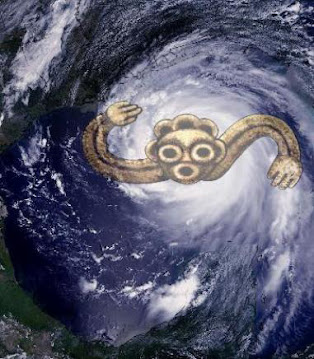 Above: Two satellite images of hurricanes. One looks like the skull of a human, while the other is a Taino "S"-shaped image superimposed over hurricane Katrina as she made landfall over Louisiana. 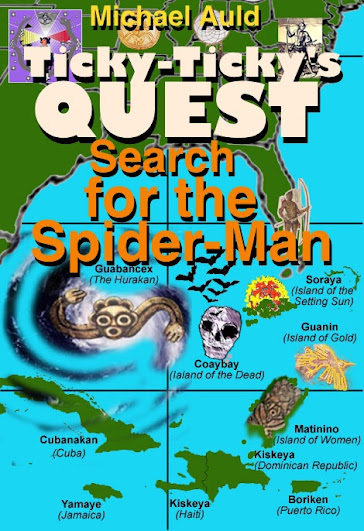 Above: The front cover of PART ONE of the Ticky-Ticky Trilogy. The illustration is of the mythical Caribbean Sea.

ALSO: Click on this link so that you and your children can get the hurricane lowdown!

HERE IS A SNEEK PEEK PREVIEW OF

Part 2, which is in production!

In Part 2, Ticky-Ticky "Travels to Turtle Island", which is Ticky-Ticky's adventure into North America, still in search of his dad who is visiting what Anansi is convinced are his "rich American god-relatives". This adventure takes Ticky-Ticky to ancient American places to meet his Native American spider-god relatives, heroines, and heroes. 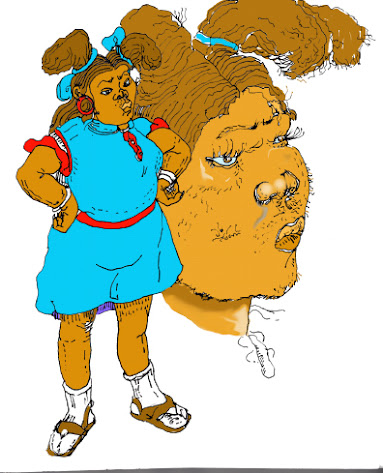 (You can click on the above link to see a bit about my history on my anansistories.com website.)

Ticky-Ticky's adventures are based on my own experiences in Jamaica and the United States of America. I've known about Kweku Anansi the Spider-Man all my life. I am an exhibited visual artist, published author, and educator from the elementary through postgraduate levels. I was born in Jamaica where, from infancy, the practice was to swap Anansi stories. So, we entertained ourselves with the antics of the Ghanain-originated Spider-Man from the Akan-speaking Ashanti/Asante people. One of my first elementary school books was about him. It was about Anansi going to bird country. Anansi was very deep in the Jamaican psyche and we reinforced our island's morality via his stories that ended with local morals, of which there are many.

A member of Taíno cultural groups, I received a British Colonial education up until my graduation from Calabar High School (see Ticky-Ticky's uniform with the school's colors on his shoulder tabs). So, Ticky-Ticky is based on some of my own high school experiences and my arrival in the United States to attend Howard University to major in Design. I married a District of Columbia Native American on campus from Pocahontas' Pamunkey tribe, the leading nation of the historic Powhatan Paramountcy. Both artists and educators, we traveled the Eastern Woodland's powwow circuit informing audiences about our Indigenous heritages via educational handouts and hand-printed posters and apparel. My grandchildren have Navajo ancestry from New Mexico, while others have Mixteca ancestors in Cuernavaca, Mexico.