WHERE ARE WASHINGTON, DC'S INDIANS?

Most Americans think that DC's Indigenous people are extinct.

However, not so. There are Washingtonian families whose history goes back before Captain John Smith's English arrival in 1607. These descendants have continued to be born in DC hospitals, gone to its schools and worked in both Federal and local governments. Yet, because they have been dismissed out of hand mostly by DC's relative newcommers, benign treatment of Native Americans, plus local ignorance of Amerindian history, they have become invisible. Our children deserve some clarity.

So, here is an insight into DC's indigenous history. 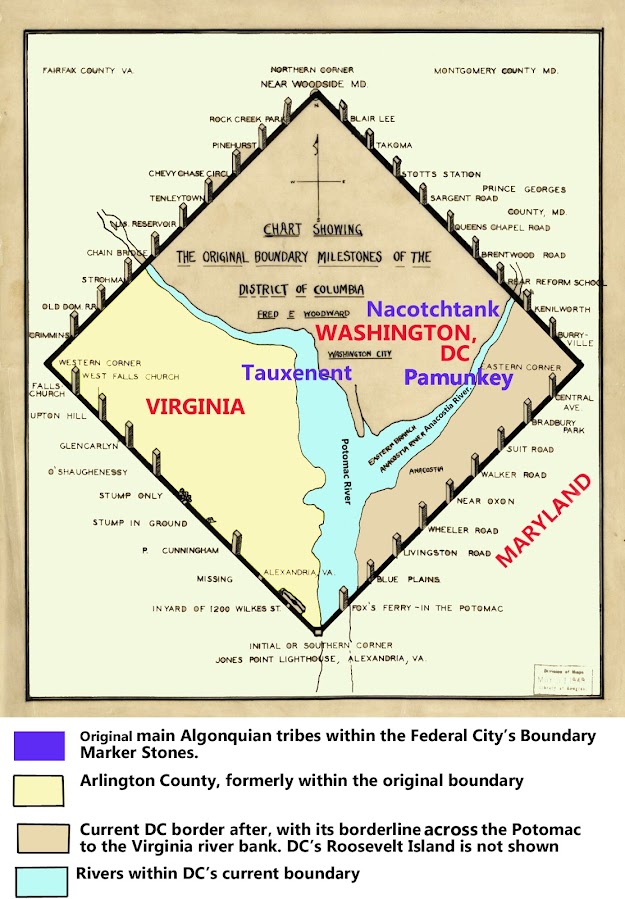 Arriving in Washington, DC in 1962, I have often wondered what became of the Indigenous People of the Metropolitan Area. So, I did my research.

The Inside Scoop on the People Who Stayed

An indigenous Washington, DC Land Acknowledgement by a Native Wasingtonian. 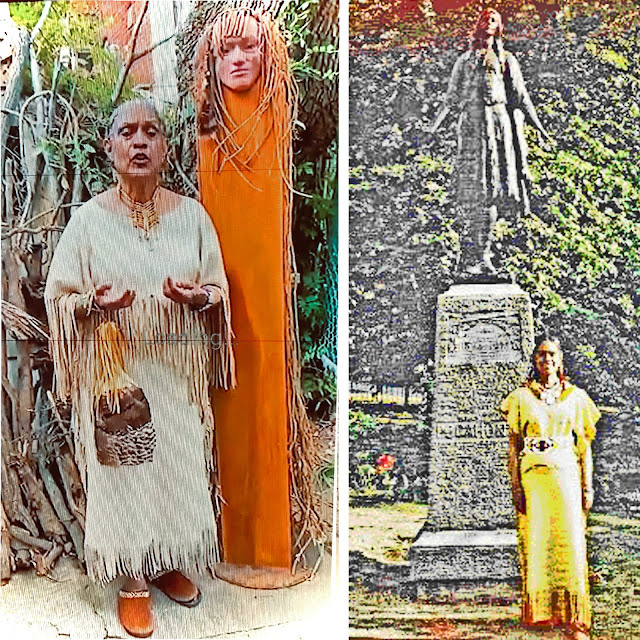 Figure 2: (L) Rose Powhatan (Pamunkey/Tauxenent) with the likeness of her ancestor, Tauxenent leader, "Keziah Powhatan: the Firewoman Warrior" traditionally based totem in her Northwest DC Tauxenent home, giving a Land Acknowledgement blessing, August, 2020. Keziah burned down the Fairfax County courthouse in 1752. Her Tauxenent/Dogue tribe's land was given to Lord Fairfax by his cousin the King of England.

(R) Rose on her Fulbright Foundation’s Teacher Exchange (1994-1995) in front of the original Pocahontas statue, St. Georges Church, Gravesend, London. Pocahontas was buried under the alter of the church. While at the St. Georges School, she assisted teacher Di Coleman as a consultant and costume designer in a traveling play on Pocahontas’ life.

(2) Or see the Sankofa blessing on the opening of the beginning of Into Action on YouTube: https://youtu.be/T9zlVJvL1l4

Other than above photo, have you ever seen a real DC Indian?

Cherokees cannot identify as Navajo, neither can an Apache be a Miccosukee. Yet three related newly state recognized tribes located 22 miles away from are now trying to make such a name-changing move with Anacostia’s extinct Nochotank. They, against Native American tradition, want to be illegally installed as DC’s Indians. Anyone other than the Pamunkey or Tauxenent is as fake an indigenous Washingtonian as the Redskins football team. Native Americans from our area were dogmatic about tribal identity. These Algonquians even had identifying hair styles, unique feather adornment, a specifically designed bows and arrows, clothes and body tattoos. To steal the extinct Nochotank’s identity, as is a current move by outsiders, is ancestral sacrilege. 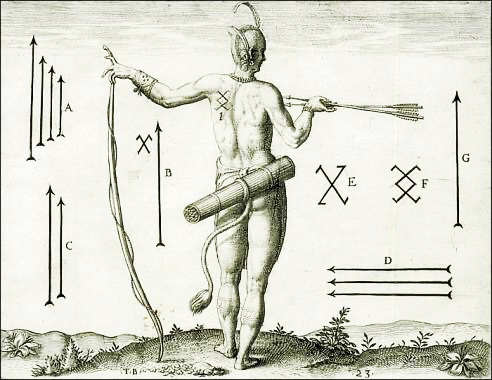 Figure 3: A Theodore de Bry (1528 – 1598) etching from John White’s watercolor of Secotan Algonquians of the  John White cataloged the wearer with a tribal marking and other designs associated with Chesapeake Indians. In the Americas this totemic figure or entity design acknowledged tribal identity. All three DC Indian tribes had this practice.

Native Lives Matter and Land Acknowledgement narratives are in keeping with the inclusive movements of our times, as an honoring of our indigenous people, many of whom have become invisible. They suffer nationally from a spate of disappeared women; higher percentages of suicide, alcoholism, poverty and above numbers of devastating illnesses. Yet, Native Americans, including Rose Powhatan, her children, grandchildren, and other local Powhatan descended families who call DC home, have continued to survive in their ancestral Washington, DC homeland. This honoring of an Indigenous people in the spirit of a United Nations edict on indigeneity is necessary. It is an acknowledgement which makes a DC statement that all who are of Native descent can feel welcomed in a city which houses the Bureau of Indian Affairs, the Smithsonian's National Museum of the American Indian, and other indigenous Federal and private sector workers as well as those transplants to our Nation's Capital. Native Lives will indeed matter.

Washington, DC was carved out of Indigenous Amerindian territory originally named Attan Akamik,  which turned into the Virginia Territory, then the states of Virginia, Maryland and other states as far north as New York.

Earlier in the 1600s, Wahubsenachaw (publicly known as Powhatan) also provided life-saving corn during the harsh 1600s winters. Scientists have recently found that during this era the Americas became much colder, caused by planetary cooling. This was the result of the Amerindian Holocaust instigated by the droves of  European arrivals in this hemisphere. The pandemic and killings caused an estimated 90% demise of indigenous inhabitants in the .

The Powhatan people also made clothes for the Revolutionary War effort; Pamunkeys were persecuted for hiding out escaping enslaved African Americans on their Tidewater reservation (the first North American reservation); while cousins were marched off in chains by the Confederates and charged for helping the Union Army during the Civil War. Powhatan descended stone workers from the Tauxenent and Pamunkey, indigenous to the Washington Area’s families, mined rocks from local quarries which were built from their ancient ancestral stone mines. One example is Rock Creek’s 3,000 year old bluestone mine on , on which the National Zoo was later built. This DC mine was active until 1885. The Amerindian antecedents had also knapped arrowheads, axes, hammers, and pecked out cooking utensils from the many sites along Rock Creek.

When other nearby indigenous people cowered, beginning in 1610 the Powhatan people fought in all of the wars since the homeland security Anglo-Powhatan Wars. During WWII, one DC mother of her city's Pamunkey children, repeatedly sneaked off her Federal job to go to a downtown movie theater. She serially watched her Pamunkey son riding on his US Army truck into as part of the force to liberate that German city. Her son-in-law who was from a large local Tauxenent family survived the Pacific War Theater when his destroyer was shot out from under him. After the war, he defied the segregated bus system, when he told his young Pamunkey wife, "We are Indian, and we do not sit at the back of the bus."

Other sites which these Algonquian descendants helped to construct was the , 's iconic Exorcist movie steps in . Bridges, canals, and other important buildings were constructed from the Seneca sandstone endemic to their area. These rocks were used for backing the 's marble facade, the (between 1847-1857), as well as the Capitol floors and Rotunda door frames.

The Powhatan descendants are not to be just dismissed entities, but are living people who have continued to contribute, born, educated, work, die and buried in DC and its surrounding Metropolitan Area.

1.    The original “ ” (or DC) was mainly carved out of (Susquehannock tribal territory) to the city’s Northwest and Northeast, and to the Southeast and . These western and southern counties were Algonquian. The city’s boundary was located in ’s , and still includes the Tauxenent’s Roosevelt Island in the . seceded back to so that voters could participate in the election of George Washington for whom the was also named.

2.    Some Maryland Pamunkey (whose capital in the 32-34 tribal  Powhatan Paramountcy, and its leading tribe, originated in Prince William County, Virginia) while some of their villages were located near other Algonquian tribes which lived in Prince Georges County (they as well had other villages in Charles and St. Mary’s Counties of Maryland). The only remaining presence of the Pamunky in is the of in . They, along with the Tauxenent/Dogue were trade partners with the Piscataway, “a loosely knit smattering of tribes” (whose center was in Moyaone or Accockeek, with 1,000 souls) in where they existed “between the fourteen and seventeen century.” During the 17th century upheavals brought on by encroaching European colonists, “from 1642 to 1685 leading to the destruction of Susquehannocks in 1676 [in ] and the removal of the Piscataway in 1699 to . By 1711, the no longer [existed] as a separate tribal community.” – chnm.gmu.edu. .

3.    So, what happened to ’s Indians? In the case of the state’s indigenous history it shows that in the 1700s the state was left with a mélange of tribal remnants who intermarried with European and African arrivals, three newly state recognized tribes being called by sociologists “Tri-racial Isolates.”  There were three major tribes within DC’s Boundary Markers; they were the Tauxenent of Arlington County and , the Nochotank and Pamunkey in and . During the post European Colonial encroachment,  Amerindian history of and became horrific. Deaths by murder, wars and European pathogens caused most surviving tribes to remove themselves from ancestral lands. Native refugee patterns show that, in Maryland alone many of its indigenous populations who survived European diseases and attacks were routed and forced to leave the state, some crossing the Potomac River to join the powerful Powhatan Paramountcy who themselves were at constant war with the Jamestown invaders. Other indigenous Marylanders fled the fledgling European state to melt into eastern Virginian and northern tribal nations as far as and . Similar to the later 1838 Cherokee’s Trail of Tears, in the case of Marylanders some stopped along the way north to melt in with Algonquian Delaware, Iroquoian Pennsylvania and New York tribes. To see the turmoil of Amerindian relocation within the original counties of Maryland which bordered Washington, DC and beyond Maryland’s Historic Tribes is a state’s governmental document which describes all of that state’s historic tribes by county locations before and after European contact. https://msa.maryland.gov/msa/mdmanual/01glance/native/html/01native.html

4.    Then, what happened to ’s Indians? After the First Anglo-Powhatan War in 1610, many kept their territories via the British introduced reservation system in 1658, even after the 1677 treaty of Middle Plantation with Cococoeske the Queen of Pamunkey and those Indians under her. The treaty was between her and Charles II, the King of England, Scotland, Ireland, France and Virginia. (http://powhatanmuseum.com/Historic_Documents.html) . The Pamunkey have the oldest reservation in since theirs and the ’s were established in 1658. Others lost theirs in the 18th century. For example, the the and Chickahominy in 1718; the Nansemond sold theirs in 1792 after the American Revolution. Native Americans did not believe tyhat humans could own the Creator's land. So, the Manhattan "sale' of that island to the Dutch for beads, fits the Native concept thatat land belonged to  the Great Spirit. They must have thought that they got over on the stupid Dutch belief in owning segments of Mother Earth. After losing their reservations to encroaching colonists, “some landless Indigenous members in Virginia and Maryland intermarried with other ethnic groups and became assimilated. Others maintained ethnic and cultural identification despite intermarriage. In their maternal kinship systems, children of Indian mothers were considered born into her clan regardless of their fathers.’”—Wikipedia.   Only the Pamunkey and Mataponi held on to their reservations. Seven of ’s 11 state recognized tribes are federally recognized.