the Great Hare and other tales:

As told by Rose Powhatan (*Pamunkey/Tauxenent) at two venues. 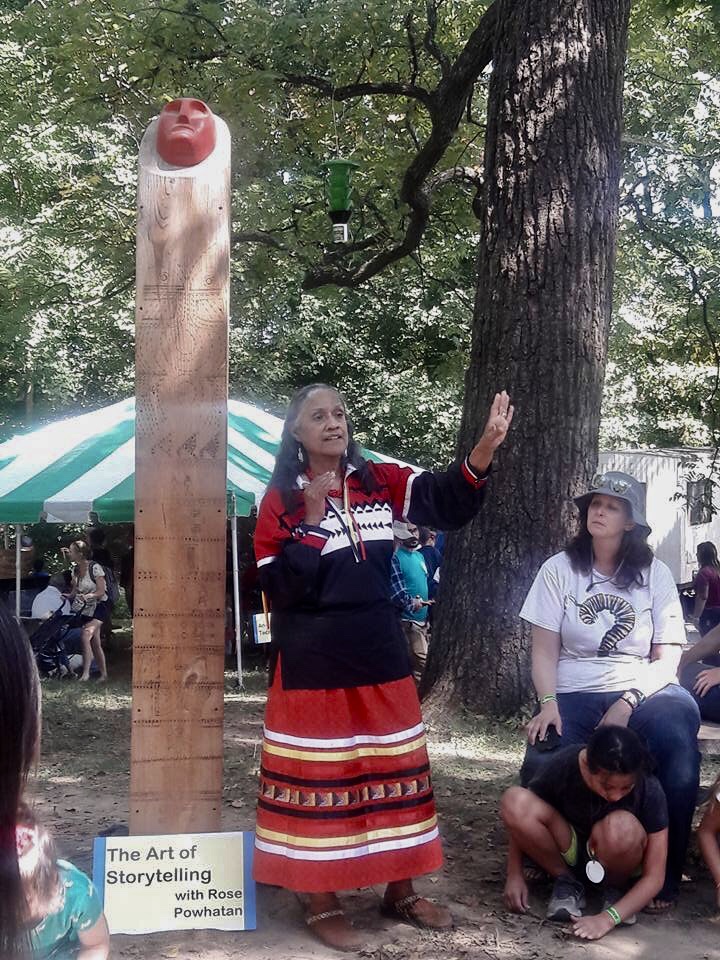 Rose Powhatan  on a tradition estimated to be over 12,000 years old. The epic is about a giant hare called Michabo. He had a priestly following by Algonquian speakers, the largest linguistic Indigenous group in . He was known throughout their land from to the . His time-honored tales live on through Rose’s storytelling in her city of birth, her in N.W. Washington, D.C. This city is a part of a larger land area that also includes Northern  some of her family grew up hunting and fishing with their Pamunkey (Mills) family. Algonquians married each other within their confederated nations. Rivers were not boundaries, but highways and food sources.

Here, Rose is standing in front of her fire engraved "Treaty Story" Powhatan Totem. The sculpture is a modern 1982 rendering of a traditional set of totem poles captured in 1585 in watercolors by the English watercolorist, John White. This totem is on loan to the Riverbend Park as part of a Tauxenent installation in the park's Visitors Center. The pictographic story on the shaft of this totem has a used some Pamunkey traditional pots made from the early 1900s.

From the time of Powhatan II, Pamunkeys have traveled from Tidewater , settled outside D.C.,  southern and have been born, lived, been educated, worked and have been buried in the Nation’s Capital. This was, of course, Powhatan II’s favorite Capitol Hill location by the , to caucus (from a Powhatan Algonquian word) with surrounding nations. Chroniclers stated that "Powhatan never left his area."

Rose’s stories are a part of D.C.’s Powhatan Confederacy that emanated from her  center on the Pamunkey Reservation in , . This was the “Place of the Sweat” as Pamunkey translates. It was also thought to be their temple center for Wahunsenachaw, publicly known as Powhatan II, father of Pocahontas.

The Algonquian culture hero was the creator of the world and the impersonation of life. He was reputed to possess not only the power to
, but also of creating life in others. He was chief of all the animals
And in ancient times caused mankind to be born from the dead bodies
the first of those who died, thus giving rise to the widespread belief
these Amerindians that they had their life force from animals. He impersonated life in an unlimited series of diverse personalities. He was life struggling with many forms of wanting, misfortune, and death that comes
the bodies and beings of nature. In his journeying over the earth, he destroyed many ferocious monsters of land and water whose continued existence would have placed in jeopardy the fate of the people.

One of these monsters was the Great-Horned Serpent. The fossil bones of extinct animals occasionally brought to light, are said to be the remains of monsters destroyed by the Great Hare.

Incidentally, Roosevelt Island was a source of Tauxenent beaver pelt trade, fishing, and hunting the noisy bird, the "" (Canadian geese that flocked there yearly in the thousands in Fall, giving the river the raucous name "Cohonkarutan"  or "River of the Geese".  was also the source of the English words "honk," "honky" and "honky-tonk"). The Tauxenent island seemed to have also given the last remnants of the  Nochoctank survivors a temporary place of refuge in 1668 after they had been driven from the bank of the Anacostia River. The final report of the Algonquian Nochoctank was reported sighting in Detroit, Michigan.

WHERE ARE THE POWHATAN PEOPLE TODAY?

HOW TO IDENTIFY AN INDIGENOUS TRIBAL GROUP?

I have witnessed that research by qualified historians in local Native American history must be consulted before beginning an all-important Land Acknowledgment ceremony. In this task can be daunting since the Nation’s Capital attracts members of many Native groups from around the nation to Federal jobs. Among Native Americans, language or ethnicity can be identity markers for the indignity of an Amerindian nation. As it stands today, there are many non-Algonquian pretenders who are now claiming the title of "'s Indians." The city, as part of the Eastern Woodlands, was not comprised of the other historic Iroquoian or Siouan competing nations. It was Algonquian and continues to be so defined up until this modern era. DC’s problem is that local Amerindian history is not taught in our schools. This dilemma leaves the city wide open for misinformation to our city's students. Yet, there are many published authoritative authors whose careers have been on the Powhatan Confederacy and its surrounding area.

As a result of continued tribal sovereignty, it also stands to reason that those extinct Algonquian-speakers tribal villages who were linguistically connected should be represented by the city's surviving Algonquian descendants who have never left their area.


The continuation of cultural practices is important to being indigenous. Rose Powhatan's
,  Algonquian storytelling and the continuation of her ancient Amerindian traditions in her contemporary artworks, qualifies her as an Indigenous Wisdom Keeper.

NOTES:
1.    *The Pamunkey was the leading nation in the historic Powhatan Confederacy, who met with Captain John Smith in 1607. Both it’s leader Powhatan II and his minor daughter, Pocahontas, was Pamunkey whose Reservation in in is the oldest in the . Inheriting eight nations from his father, Powhatan, his 32-34 Algonquian nation “empire” as the English perceived it, was the largest political territory led by one man in North American history. He allowed the to come into existence, yet only his daughter is so honored in the Capitol's Rotunda, by a large painting of her baptism. Why has Powhatan II not equally honored in the Nation's Capital? http://www.powhatanmuseum.com
2.    **Attan Akamik = "Our Fertile Country", one of the names for Powhatan II's territory.
3.    ***Pamunkey means "Place of the Sweat", an allusion to the sacred or temple location of the powerful "empire," sometimes called a "confederacy." They are technically the historic progenitors of a major portion of and should be so recognized in all sovereign  to territory Land Acknowledgements in the Nation's Capital (See DC map above).
4.    ****What is a Land Acknowledgment?
A Land Acknowledgement is a formal statement that recognizes and respects Indigenous Peoples as traditional stewards of this land and the enduring relationship that exists between Indigenous Peoples and their traditional territories.
5. To see first person videos and information on the Land Acknowledgment, go to:  https://usdac.us/nativeland
6. DC Neighborhood map:   https://en.wikipedia.org/wiki/Neighborhoods_in_Washington,_D.C.#/media/File:DC_neighborhoods_map.png