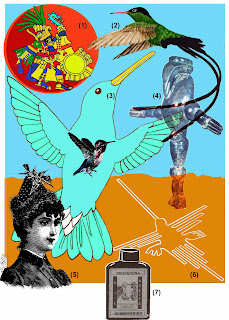 © 2008 Michael Auld
Image: (1) Huitzilopochtli, the Mexica’s hummingbird-warrior and sun-god. (2) Jamaica’s national bird, the Streamtailed or “doctorbird”. (3) Cuba’s bumblebee-sized hummingbird superimposed on an image of the biggest hummer, the swif-sized South American Patagonia gigas. (4) Jamaican Taíno sculpture of what appears to be a hummingbird man. (5) A Victorian woman wearing a hat with stuffed hummingbirds attached to it. (6) Gigantic image of a hummingbird from the famous Nazca of the Pampa region of Peru, South America. This etching is one of 300 large linear earthwork designs created between 200 BC and 600 AD. The images were made by scraping away the top layer of iron-oxide coated surface pebbles to reveal the lighter color underneath in order to create drawings that are only recognizable from the sky. (Nazca Lines and Culture, http://www.crystalinks.com/nazca.html).
(7) Hummingbird Magic for attracting the opposite sex. Like Polvo de Chuparrosa or "powdered hummingbird " this is an image of a premixed cologne or perfume, one of the items along with votive candles and amulets, sold in Mexico and South America.

Colibrí /ko-lee-bré/ n. 1. Taíno name for a small brightly colored bird of the Caribbean, North, Central, and South America that can beat its wings rapidly, making a zum-zum or humming sound. 2. the Spanish, Portuguese, Italian and Dutch (kolibrie) words for hummingbird originating from the Taíno language. Family: Trochilidae 3. also Zum Zum, (from Cuban Taíno) apparently from the sound made by the bird’s wings while in flight.
4. Called the hummingbird in English

Hummingbird /húming bird/ n 1. an English word which is derived from the humming sound made by the bird’s rapidly beating wings. 2.the tiny hovering bird called colibrí by the Taíno.
3. a small jewel colored bird found only in the Americas related to swifts and having narrow fast beating wings, a long slender bill, and extended tubular tongue for drinking nectar. 4.also called a “hummer” by some American bird lovers.

The Western Hemisphere
Through out the western hemisphere indigenous Americans have almost as many local names as they have myths about the tiny revered hummingbird. For example, in the Nahuatl language of Mexico its name means “rays of the sun” or “tresses of the day star”, while in some South American local dialects it is a “house cleaner”, “flower sucker” or “flower kisser”. Believed to be reincarnated warriors, or emissaries to deities, they are identified with a supreme god of the sun and war. They are also worn as earrings by chiefs, sought after for their jeweled pelts by Aztec royalty, shamen and Victorians, used as love potions (“Polvo de Chuparosa”), and the major character of many indigenous American mythologies. These are only a few of the descriptive qualities of the world’s smallest bird. This indigenous native of the Americas was called (1)colibri and zum zum by the Taíno and hummingbird by English speakers. The name colibri is still used in Spanish since they were the first non-natives in the Americas to see a bird to which they also gave mythical qualities.

The Eastern Hemisphere
Soon after their arrival in the America’s Caribbean the Spanish reported back to Europe about a fantastic bird in the “New World” that never landed and who made its nest in the sky. The Spanish, upon their return from the Caribbean told Queen Isabella of Spain, Columbus’ benefactor, that the hummingbird was a cross between a bird and an insect. It was in the 15th century that Castillians (Spanish) in the Caribbean saw the hummingbird for the first time. They were fascinated with its diminutive size and brilliant, iridescent colors. The birds were (2)"compared to precious stones and gems which have given rise to such names as ‘topaz’, ‘sapphire’ and ‘ruby’." Specimens were taken to Europe as part of the curious objects from the “New World”. This unusual bird captivated both scientists and the public. Stuffed hummingbirds were in great demand throughout the Victorian era. In 1888, four hundred thousand hummingbird skins were sold as clothes decoration and for jewelry in London alone. Ironically, this was one of the ways that the variety within the hummingbird specie was scientifically counted. During this era having encased specimens to adorn one’s home was the rage. The exportation of millions of hummingbird skins from the Americas has dramatically slowed but contemporary habitat destruction has endangered the species. Live specimens are difficult to keep and some that were hardier in captivity have been exported to aviaries outside of the Americas

The Habitats of Select Species
Hummingbirds are the second largest family of birds in the Western hemisphere. They are found throughout the Americas from Tierra del Fuego in the south to the Arctic Circle in the north and Barbados in the easternmost Caribbean. There are 338 species. Eighteen of these are found in North America while16 live in the Caribbean. They are most numerous in Columbia and Ecuador where 130 species exist. Most of North America’s hummingbirds travel up the west coast (some journey 2,000 miles). The Ruby-throated (Archilochus colubris) winters in the Caribbean and Central America and in the spring migrates to eastern North America (from Labrador to eastern Mexico and westward to central South Dakota) where it breeds. During the Fall the Ruby-throated return south in swarms. Since hummingbirds often return to the same branch or nest, they are being acutely affected by loss of habitat. Organizations like Nature Conservacy (nature.org) “must think globally [to] protect areas throughout the world to come together to form a large mosaic of protective lands and waters.” They “have created strategies to help all along the migration routes.” Some hummers like Cuba’s bumblebee-sized hummingbird and Jamaica’s national bird, the Streamtailed or “doctor bird”, are endemic to only those islands. Cuba’s hummer is the smallest member of the of class of Aves in the world while, although Jamaica’s doctorbird can measure up to ten inches from its beak to its two tail feathers. The swift-sized Patagonia gigas of South America is the biggest.

Mystical Warriors
Known as “feathered jewels” the hummingbird has had a mystical reputation since ancient times in the Americas. The light reflective qualities of its tiny feathers turns to dark hues in the shadow and become brilliant faceted colors in the sunlight. The Taíno associated the colebri with the glitter of their highly prized 14k gold called guanin. The reflective sheen of the hummingbird’s feathers was like the bright copper-yellow guanin used to render the eyes of some sculptures. Metallic brilliance was associated with a spiritual gate between two worlds. The reflective sheen provided a crossable bridge into the (3)cohoba world of the (4)cemis . To the Taíno the hummingbird was seen as an important crescent shaped symbol and was associated with similar forms such as the quarter moon and the rainbow. An image of this geometric shape was also achieved when the male of some specie fly in a perfect arc during its mating ritual.

(5)"Aruacs (Taíno) regarded the Humming-bird as the incarnation oftheir dead warriors, and the name God-bird also applied to it, and the supernatural awe attached to it suggests that the Indian belief has been taken up by the [Jamaican] blacks in a modified form, and that ‘doctor-bird’ is ‘medicine man bird’."

The Jamaican national bird is the specie Trochilus polytmus which is the unique Streamtailed hummingbird called a doctorbird. One Jamaican folk song warns (6)"Doctor bud a cunny bud, a hard bud fi dead”. A similar belief by the Mexica (Me-shee-ka) (Aztecs) was that (7)Huitzilopochtli (Whits-ill-low-poach-lee), the warrior sun-god, was associated with the hummingbird. They believed that four years after dying in battle, or as a sacrifice, the spirit of the warriors left the brilliant retinue of the sun god to forever live in the bodies of hummingbirds. Therefore, hummingbirds were placed on the graves of their warriors.

This association with warriors reflects the ferocious spirit of the hummingbird who will attack an intruding hawk or a human. The added solitary habit of this territorial bird is also identified with Huitzilopochtli, the Mexica sun god. The first part of this Mexica god’s name Huetzilin means hummingbird and he is sometimes depicted as this bird. The second half of his name means “from the deep south” or the spirit world. In his nahuat (spiritual) disguise he also appears as an eagle. He is the sun, a relentless warrior-god who each morning rises in the east to subdue those siblings (his sister the moon and his brothers the stars) who had plotted his death while he was still in his mother’s womb. He was born fully grown and vanquishes them each day. Among the Maya there is also a god who is in the form of a hummingbird.

Reincarnation
To conserve the high energy used for darting and flying the hummingbird is the only bird that can become torpid. This habit of going into a deep sleep of suspended animation when resting at night and its reinvigoration by the morning sun’s rays is associated with attributes of “reincarnation”, a belief shared by the Mexica. The use of its beak to penetrate flowers is associated with powers of healing and love. Amulets were made from body parts of the hummingbird and worn in medicine bags (that are still used as love potions in some areas of Central America). The Arawaks of Venezuela, who are related to the Taíno, believed that their ancestors obtained their first tobacco seeds from Trinidad through the ploy of a hummingbird. There are hummingbird tales from the Taíno, Apache, Aztec, Maya, Mohave, Chayma, Navajo, Hopi, Zuni, Cherokee, Cochti and many more peoples of the Americas.” A traditional myth of the Cherokee tells of a pretty woman who was wooed by the Hummingbird and a Crane. She preferred the hummingbird because he was so handsome, but the Crane was very persistent, forcing her to challenge the suitors to a race around the world”. The Crane won since he did not have to stop to rest at night. She disregarded the result of the race and chose the Hummingbird. (Hummingbirds, A Wildlife Handbook by Kim Long)

There are many books and Web sites on the Internet with stories and information on hummingbirds.

Click on to the link to see a satellite view of the Nazca hummingbird image as compared to the Empire State Building. http://agutie.homestead.com/FiLEs/incas/nazca_hummingbird_1.htm

Footnotes:
1. The word colibri was also adopted in other non-American languages.
2. The Birds of Jamaica, Frank Bernal O.D., p. 64
3. A powdered snuff-like hallucionogen used by the Taino shaman and cacique (chief) to transport them to a separate spiritual reality.
4. Religious Taino objects made in various liknesses of spiritual beings and made from materials such as stone, wood, cotton, shell, bone, etc.
5. A 19th century spelling of Arawak, the term used in the English-speaking Caribbean to refer to the Taino. From 1847, Geosse, p. 89, Dictionary of Jamican English, Cassidy and Le Page, p. 152
6. "Doctor bird is a cunning bird, a hard bird to die."
7. Huitzilopochtli (from Nahuat huitzin, "hummingbird", and opochili," left" or "south"
Posted by Mike Auld at 11:20 PM No comments: