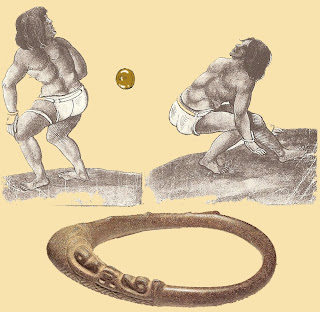 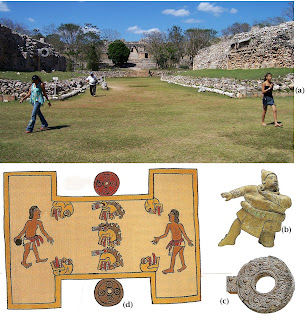 Left
Above: (a) Taíno ball players as seen in the Caribbean (Hispaniola) and reported by the Venetian Ambassador to Spain at the Spanish court, Seville in 1493.
(b) Taíno stone belt worn by a player that counterbalanced the body during play. Carved belts like this found in Puerto Rico weighed between 15 to 57 pounds. Conquest of Eden by Michael Paiewonsky

Below: (a) Ancient Maya ballcourt ruin at Uxmal, near Merida, Mexico, 2008 (Photo by Michael Auld). Note the ballcourt ring protruding from wall above woman to the left.
(b) Ceramic effigy of Maya ballplayer.
(c) Ballcourt ring.
(d) Ballcourt illustration from an Aztec codex. The ballcourt rings in the middle of this illustration may represent the fateful movement of the sun across the sky centered between skulls at the four corners of the sacred cardinal directions. Two players representing their teams prepare to lob the ball into play.

Imagine that you are part of an ancient civilization of warriors. One fateful morning you calmly stand and prepare to pray to the four cardinal directions. You light the brazier and waft sacred smoke over your body. You then strap on protective gear over your elbows, knees and hip. You are preparing to join your unit in a battle against evil forces and this may be your last day in this existence. Your death will be swift and today will indeed be a good day to die. The ceremony in which you are about to engage with teammates will spill blood to seed the earth. You will fight to gain the honor of being the people’s emissary to a god. If you are fortunate, in admiration your family will bury you with a ceramic effigy or a stone sphere representing the vulcanized blood of the hule tree. For your rebirth, your family will lovingly place the glimmering feathered body of a hummingbird on your grave. These hopes pass through your mind as you enter the stone walled ball court. Its sides are teeming with shouting admirers, some of whom are gambling on your fate.

This ceremonial game began with the invention of rubber and by the Mesoamerica’s mother civilization, the Olmec. Some Amazonian peoples used the “blood” of the rubber tree to remove unwanted body hair. Mesoamericans used rubber to make toys, bungee straps, wrappings for cushioning tool handles and for waterproofing shoes and capes.

Because of its antiquity, the Mesoamerican rubber ball game is considered to be “History’s first team sport”. When the Italian adventurer Christopher Columbus and the Spanish first arrived in the Americas in the 15 th century, the Caribbean’s indigenous Taíno people played an Amerindian rubber ball game called batu. According to the National Park Service’s National Register of Historic Places Itinerary, “The first written description of the game, played with two teams and a rubber ball, appeared after Columbus' first voyage.” Unable to believe their eyes, the arriving Spanish thought that the miraculous bouncing of the rubber ball was a result of witchcraft. The Taínos played a non-fatal version of the ball game on a clay court called a batey. Many Taíno villages had a batey that was also a center for social gatherings.

In Puerto Rico, a major archeological site in Caguana, Utuado has over 30 ball courts (bateys) built in 1270 AD, estimated to be over 700 years old  ( http://www.nps.gov/history/nR/travel/prvi/pr25.htm ). The most impressive playing enclosure is a large clay court that resembles a soccer field bordered in one side by paved stones. At one side of the field are flat upright stone slabs with incised images of Ataberia, the virgin mother of the Supreme Being, Yucahú Bagua Marocotti. Some stone slabs bordering the field weigh over one ton. Women’s teams sometimes played the Caribbean version of the game, unlike its Mesoamerican ancestor. In Mesoamerica, the ball courts were often “I” shaped fields bordered on the east and west sides by sloping stone walls. Some walls had stone rings set in the side through which a player bounced the solid nine-pound ball off his hip, elbow or shoulder. In both versions of the game, the players could not use their hand hands although in one version of the game ballplayers struck the ball with a bat.
Today in the Americas, fans of soccer and basketball have redirected their fervor for this indigenous American rubber ball game to more modern versions of the sport.

Early in the history of the Americas, this organized team sport, like maize, had travelled from Mesoamerica to Arizona and into the Caribbean. In some cultures, the ballgame represented the movement of the sun across the sky and the ominous outcome of this astrological phenomenon. In other places it was a source of communal gatherings where betting was the norm. Supposedly, sometimes either the winner or the loser’s head was decapitated as an honorable sacrificial offering “sending him directly to heaven”. The following are wall copy from a ball court in Uxmal, Merida (in Mexico’s Yucatan state) at the Museum of Anthropology in Mexico City. For one of the “Unforgettable Places to See Before You Die”, a visit to this impressive museum is necessary for anyone interested in learning the history of our hemisphere, the Americas.

Wall Copy from the Museum of Anthropology, Mexico City
(1) The ballgame is one of the defining characteristics of Mesoamerica. First found on the Central Highland Plateau [of Mexico], dates back to before 1200 BC when social and religious organization in these cultures reached complex levels. From time to time, the ballgame formed part of a cult, given finding of objects related to ballplayer’s attires. These included small yokes that symbolically represented the protectors used on hands and knees, and stone balls, symbolizing the original rubber ones. These balls were used in funerary and visual contexts. The stone balls, approximately three to four inches in diameter, were a little larger than a softball.
(2) The ballgame developed as a characteristic of Mesoamerica cultures; importance can be appreciated by the presence of buildings devoted to the execution of this ceremony.
The Ball Game Among the Mexicans
(1) All the people of ancient Mesoamerica practiced the ballgame, a ritual sport that determined the dangers faced by the sun on its daily journey across the heavens, thus predicting its fate.
(2) For the Mexicans the sacred ballgame was ullamaliztli (from “rubbery” used to make the ball). Characteristics of the ballgame were:
• Precise bounce which surprised the Europeans.
• The court was called tlaxico in Nahuat (a patio in the shape of an “I” or double “T”.
• On either side—slopes;
• Walls rings called “tlaxtemalcatl”, one to the south and one to the north. Balls go through them when struck with hip or forearm.
• Ends of court were west and east.
When a play was made that went against the movement of the sun, a decapitation was carried out. The blood vitalized the earth and the sun. Secular betting was one feature of the game.
The Ball
•Made from a tree named “hule”- the material is also called the same name of the tree. Hule came from the area near the Gulf of Mexico.
•The tree sap became rubber through a vulcanized process using diverse plants.
•The solid, heavy ball was the size of volleyball.
•The wall ring through which the ball had to pass was approximately one foot across.

Today
Amerindians from the Mexican state of Sinaloa play a version of the game, called hulama.
Posted by Mike Auld at 10:23 AM No comments: