from Michael Auld at the powhatanmuseum.com 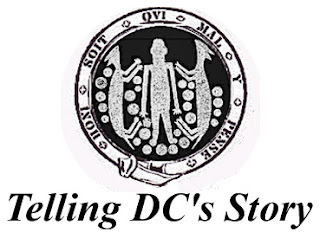 The 1970 painting below was done by a Washington, DC Pamunkey artist who was descended from a family of 21 siblings. She was one of many family members with deep roots in the  Metropolitan area. In keeping with Native American tradition, one must be familiar with their identifying tribal surnames. In the “DMV” area, Indigenous names are mainly those associated with Powhatan Paramountcy affiliation. Indigenous Washingtonians live among the city's populations but have not yet been "discovered" by the mainstream. They are literally “hidden in plain sight."

One of the most overlooked stories of our Nation's Capital is about its Indigenous Washingtonians. The assumption is that the city is a barren plum sought after by members of outside tribes or other newcomers. DC is often thought of as having no real history of its own before the arrival of Europeans. On the contrary, there is a vast underground of local Native Americans who never left the DMV area. Their roots go back over 10,000 years.

Most documentarians of DC’s Indigenous people overlook links to the Powhatan Paramountcy, however, there are five writers who are Pamunkey and/or Tauxenent. They include Georgia Mills Jessup, “We're Still Here"; her daughter Rose Powhatan, “Surviving Document Genocide"; and Rose’s sons, Alexei Auld, "Tonto Canto Pocahontas: A Review"; Kiros Auld, "Pocahontas:Patron Saint of Colonial Miscegenation?"; and their cousin's, "Pocahontas' First Marriage: The Powhatan Side of the Story" by Dr. Phoebe Mills Farris. They all have roots in DC and have written about their city's tribal nations while the Indigenous DC history is mostly written by non-Natives. 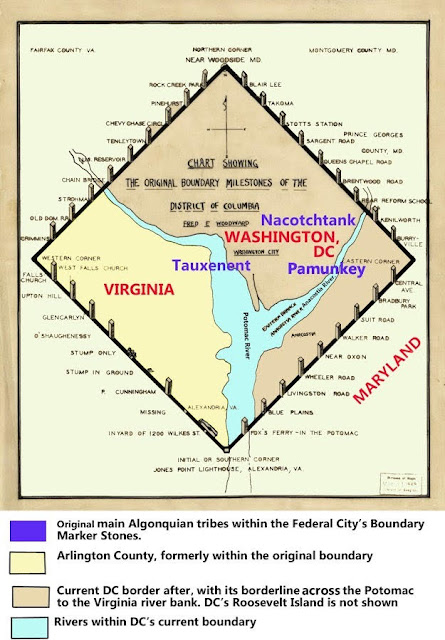 Unfortunately, DC's Indigenous story is often interpreted by newly arrived Euro-American historians. They mostly don't have a clue about who our living Indigenous Amerindians are as well as the international impact of the city's Indigenous Washingtonians. Some seem unable to connect the dots. One case in point is the portrayal of Pocahontas as a 17th century Virginia Indian first married to widower John Rolfe. His newly introduced Christian religion forced her into a bigamous marriage. To the contrary, Pocahontas was already married to Kocoum, a young war captain with whom she is believed to have had a son. Indigenous men usually moved to their wife's village, but Pocahontas temporarily moved to her husband's village for safety. Unfotunately, she was lured into abduction with the help of a Patawomeck sub-chief and his wife in
Some contemporary Eurocentric skeptics underestimated Amerindian genius, and had little faith in the cultural impact of Powhatan’s immense Indigenous territory with its unique form of freedoms within a political group. Although political unions like his had been present in the Americas for thousands of years, some writers believed that Native Americans never ventured out of their immediate tribal areas. On the contrary, Amerindians traveled extensively and left their homes on long distance trading expeditions.

Powhatan’s territory was the largest Indigenous political organization met by the English in North America. The main similarity to the pyramid builders of Central America was that Powhatan was buried in a pyramid inspired mound on the Pamunkey Reservation. Their original men were stated as "coming from the south." Some believe they came from the direction of the Yucatec "Pauhatun." An old set of Bacabs, or four part deity or deities of the four directions and four colors who are also four pillars which hold up the world. This possible Powhatan origin story could also be supported by similar political acumen in Meso-American politics and Powhatan's burial site. Powhatan's burial site may have been a part of Central American pyramid-inspired mound building tradition. Indigenous mound burials spread north to Ohio's 70 mounds.

Powhatan's power left an indelible impact on the expanding British Empire. The DMV has an unmatched record with published information on one of its Indigenous historic Amerindian groups, the Powhatan Paramountcy (See below), since the city of Washington, DC was built on ancient Indigenous Amerindian ground. Unfortunately, newcomers to DC with no general knowledge of its ancient Indigenous past, assume that DC is a transient area. Contrary to their misconception, some of its Indigenous citizens have deep unbroken Native American roots in the Metropolitan area. They are proudly "Still here."

Over 100,000 people claim descent from one woman, Pocahontas. Her father, Powhatan had 100 wives, mostly from villages within his domain. Two examples of his lineage are Taux Powhatan whose mother was Tauxenent or Dogue. He was a half brother to Pocahontas. Keziah Powhatan, an 18th century Tauxenent leader in Fairfax County has many descendants in the DMV area. Additionally, many contemporary Indigenous nations from the Carolinas to Washington, DC, once within the Powhatan Paramountcy, have descendants from the unions between Powhatan and his wives from those nations. This common international practice found among leaders was to create loyalty to the Paramountcy and protection for villages with famelial ties to their undisputed leader.

DC's Federal City was carved out of at least three Indigenous Algonquian territories of the Nocotchtank (DC proper), the Pamunkey (MD, DC & VA) and the Tauxenent or Dogue (VA & DC) and inaugurated on July 16, 1790. At the time of Captain John Smith's arrival in 1608, the Nocotchtank had been recorded to have at one time been a part of the Powhatan Paramountcy. The Pamunkey was the leading nation in the Paramountcy to whose governing family Powhatan (or Wahunsenacawh) and Pocahontas belonged. According to historians, these three DC Algonquian tribes were part of the Indigenous group whose residency went back 3,000 to 10,000 years prior to the Little Ice Age which suddenly began in 1275 AD and petered out by 1700 AD.

One example of tribal movement during that cooling of the Earth was Maryland’s Piscataway who in 1300 AD came from the freezing north into the Chesapeake shoreline to live among the original Algonquians who were already there thousands of years before. They were considered enemies of the Powhatan Paramountcy. This move ended in 1711 when they were forced out by the unbridled emigration of their English Catholic “friends,” with whom they originally had no wars. They dispersed and some moved back north to the Iroquois while others went west into the powerful warrior territory of the Powhatan Paramountcy.

As for Anacostia’s Nocotchtank, after their town was bombarded and destroyed by both White and Black Jamestown residents intent on grabbing the beaver pelt trade, with the help of their Patawomeck allies (who were responsible in the luring and kidnapping of Pocahontas), some surviving Nocotchtank remnants moved to the Tauxenent's Roosevelt Island and further inland into Virginia, then left the area in 1685 to go north to Ohio.