The Caribbean or Bagua

© 2019 by Michael Auld
If you intend to visit, have been to, are from the , or are just curious, or not just interested in sun, sand and sea, this blog is for you. Are you aware of our area's 6,000 years of human history?

Although the area still retains some original natural beauty, in terms of flora and fauna, it is but a shell of itself of 500 years ago [See extinct Cuban/Jamaican Macaw (a Taino word) below the map].

Symbolism: Her legs are frog-like, representing fertility; The bird's head is from a myth associated with a woodpecker who created a vagina for female creatures without genitals, provided to the men after their wives had been seduced during the Guahayona ("Our Pride") Epic, and taken to Matinino, the legendary  of .Women. Also, as the goddess of childbirth, her ribs are symbols of fresh water running down the mountainside. Her earrings are moon icons.


The ...
Occupies a geographic area of the  and is  971,400 sq mi (1,562,983 sq km) in size. [Approximately the size of ]. Its greatest depth (7,000 m or 23,009 f ) is Bartlett Deep in the Cayman (Taino word for crocodile) Trench between , Cayman and . The sea floor is made up of a complex system of ocean ridges, trenches, and basins. The floor of the sea is composed of tan to brown muds which contain coarse organic and inorganic materials. Surface water seasonal temperatures vary little from the air above which, in Winter can be 81 deg F (27 deg C) in the day and 70-75 deg F (21-24 deg C) during the night. Torrential rains fall during June, July, and August after the dry months of February and March. There are comparatively long periods of fair weather but from July to October hurricanes (huracan) develop. 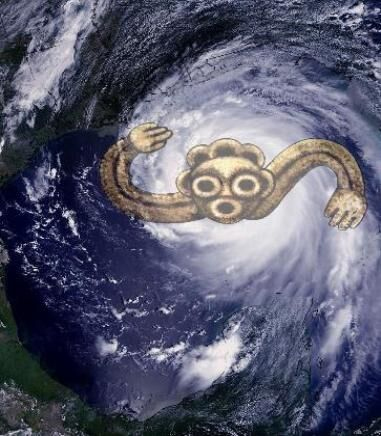 Above: Illustration fashioned after a ceramic pot's image of Guabancex, Angry Woman Goddess of the Huracan/Hurricane, Rider of the Winds superimposed over hurricane Katrina. --Photoshoped by the author.

Background image: Sattelite photography. Contemporary meteorologists call the head of Guabancex, an "eye". Taíno women drew the huracan as an "S" shaped form of a flailing woman viewed from above.

The combined land area of all of the islands is 91,000 sq mi (236,000 sq km) with the highest mountain, , rising to 10,417 ft/ 3,175 m.  The isles of the Caribbean are also called the  and are comprised of over 1,000 islands and many cays (from the Taíno "cayo").  They are composed of the , the Greater and the Lesser Antilles which range in size from  (42,827 sq mi/110,922 sq km, the size of ) to  (5 sq mi/13 sq km).  The  are mountainous and mainly sedimentary in composition. The Lesser Antilles are composed of the Leeward and , many of which are volcanic in origin. Temperatures vary from cool temperate mountains to warm sunny beaches to thorn bush and cacti covered savannas (from the Taino "sabana", meaning flat land). Northeasterly Trade Winds determine rainfall quantities and matching topographic descriptions. Many of the  islands were lush, tree-covered tropical forests at the Colombian arrival in 1492.

Over six thousand years ago is considered as the 's Pristine Era. After human arrival some early animals like the sloth became extinct. Each sduccesive wave of human arrivals weighed hevily on the Caribbean only to accelerate during the modern era. Some flora and fauna (like the Cuban bumblebee-sized hummingbird below) were found indigenous to only some islands. For hours passing flocks of parrots and doves blotted out the sun while a school of snappers could darken the sea. The dazzling array of aquatic animals was the hallmark of  bounty. From turtles to seals, dolphins to revered manatees (Taíno for “Big Woman Goddess) and whales swam its waters

Another concept associated with the geographic area was that the  consisted of a bagua (sea) with “a bracelet of islands”. In another of their Origin Story arietos (saga songs) the lyrics told that the islands were formed after Deminan was smitten on the back from a glob of cohoba (tobacco snuff inhaled into the nostrils that mixed with snot) discharged from the nostril by the god, Baymanaco on to the mischievous Deminan’s back.

"A swollen hump formed on his back and he loses strength.  Lying down on a sliver of sandy beach, in the middle of the vast ocean, Deminan takes deadly sick. Using a coral knife, one of his brothers lances the swollen hump. Out of his back comes one and other turtles. [Turtle Mother lives with the brothers and help to produce the human race]. Out of his back, slide out longer reptiles that swim out to sea. [Reminiscent of the biblical Eve being formed from Adam's rib.] When they surface from under the waters, the heat of the sun petrifies them, forming the islands, big and small, mountain ranges all over our Taino sea. Thus were our lands created." —Taíno informant.

Below (R and L): Bifricated cohoba inhalers for inducing trances. Often used only by shamen and cacikes (chiefs) to cross over into the spirit world. There is a recorded story from told to the Spanish upon their arrival. "Before the arrival of the Spanish, a past cacike, in a cohoba trance, told of the destruction of their civilization by outsiders. The Taino believed that these outsiders were the Carib. But we found out it is the Spanish."


"The corresponding ceremony using cohoba-laced tobacco is transliterated as cojibá. This corresponds culturally to the practice of drug-induced "astral traveling" so common to the and elsewhere"- Wikipedia. 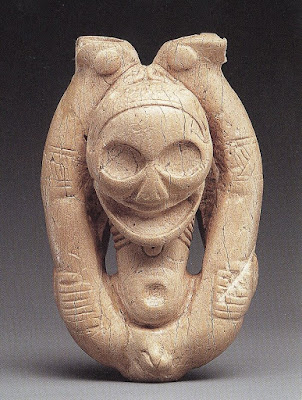 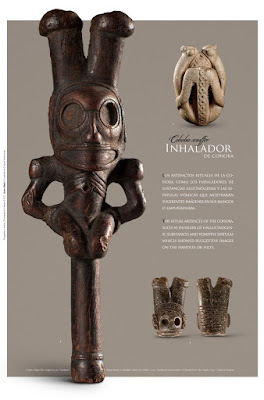 Left and Right: Taino inhalers that some believe was called Tabacu

The word was mistakenly applied to the tobacco leaf, then called kohiba..


In the Bagua, shellfish cruised or burrowed along its shores. On land, snakes, lizards, hutias ( a nocturnal rabbit-sized rodent - still found in as Indian "Coney," an Old English word for rabbit.) crawled through its underbrush and trees. Crocodiles (called cayman by the Taíno) trekked the swamps and brackish mangrove (from Taíno manglé) waters.  Bats, as Taino souls, glided through firefly-lit nights. Different ethnic Amerindian groups later populated the opulent  islands.


The earliest human inhabitants to have survived into the "historic era" are thought to be the Guanahatabeys of eastern . Although linked to the , they also shared cultural similarities with  inhabitants. They were present in 1492 and spoke a different language than the more populous Taíno and Kalinago or Island Caribs.


Casimiroid People from the Central American () peninsular, at around 4,000 BC, entered  and continued into  (Haiti/The Dominican Republic). They brought with them flaked stone tools (some beautifully designed and decorated) and lived off indigenous crocodiles, sea turtles, manatees, whales, a variety of shellfish, fruits (pineapples/anona, guava/guayaba), vegetables (probably amaranth or "callaloo") and a local tuber called guayiga. 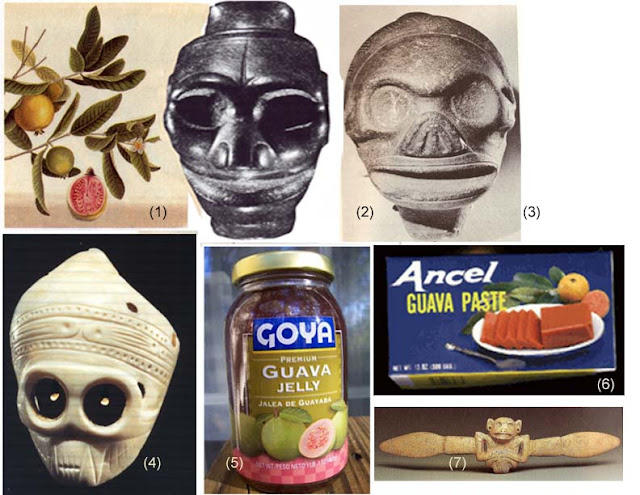 Above: Key -(1) Scientific illustration of the guava/guyaba. (2) and (3) Stone carvings of Maquetauri Guayaba, god of the Afterlife who lived on one of twin islands. His was Coaybey,  of the Afterlife or "Those Who Were Absent". (4) Opiel Guabirang, the hunting Dog of the Afterlife, who hunts down wayward souls (opias) at night to return them to Coaybey (twin island of Soraya or "Sunset", an unreachable place) before sunrise when they would be turned into stone.-- Carved conch shell with superimposed guava seed irises.(5) Sweet commercial Guava Jelly. (6) Guava cheese or paste. Delicious with cream-cheese squares, secured with a toothpick  as an Hors d'voeuvre. (7) Bat vomiting stick from a manatee bone, used to empty the stomach before going into a cojoba trance. Fruit bats were spirits, who, at night searched for guava berries that represented the "Sweetness of Life". 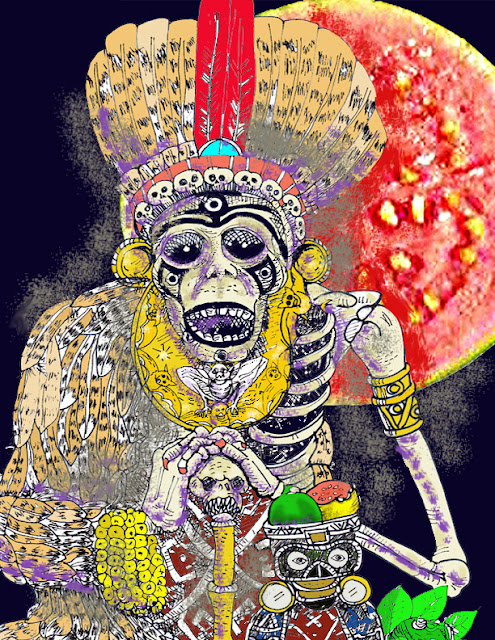 Above, Contemporary book illustration of Maquetauri Guayaba from my book "Ticky-Ticky's QUEST" (Below).

Go to http://anansistories.com/Ticky_Ticky.html to see more about the book. 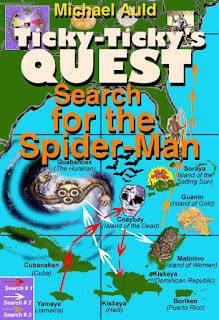 OTHER WAVES OF PEOPLE

Around 2,000 BC, Ortonoid peoples came by canoa/canoe into the Caribbean by way of the South American coast into Trinidad and continued north to a frontier in . Around 1,000 BC, the Ortonoid of Puerto Rico faced the Casimiroid people of Hispaniola across the . The next group to follow into the  were the Saladoid circa 1,000 BC.


These Taíno people... continued west into  (Hispaniola),  and  and north into the  until they may have eventually reached . Later,  Caribs expanded from mainland South America into the . Later, they made trading trips (by sail-rigged canoe) back down to .

The people for whom the  was named were called Carib (Strong Men) by the Taíno or, as they called themselves, Kaliago. They were called Island Carib by ethnohistorians to distinguish them from their cousins, the mainland Caribs of South America. Their territory in 1492, through the conquest of the Taíno men (and intermarrying with the women) stretched above  up to with extensive influence further north. Their ancestors continued to live side by side on the mainland with the Arawaks.

Their language, like Taíno , belonged to Arawakan. The men persevered the use of pidgin Cariban, employed in the communication between the mainland Caribs and Arawaks. Not much is known about the culture of  Caribs. Records of their language and culture were taken after their numbers were swelled by Taíno refugees escaping Spanish oppression in the northern . They joined in alliances with the Taínos to fight Spanish incursion into the . Although they shared many cultural practices with the Taínos they had some distinctive differences. Linguistic differences from Taino may have been because of a Carib amalgamation with the Igneri, the people who preceded them in the islands. The Island Carib, it is believed, settled among the Igneri (also Eyeri or Ieri) and adopted their language. Their reputation as un-swaying warriors caused them to endure. They have the only Amerindian reservation in the Caribbean on the  (Dommi’-nee-ka, not to be confused with the Do’-mini-can Republic).

For survival, they successfully fought the Spanish, French, Dutch, and British. In Colonial Williamsburg, the British who were very fearful of the Carib warriors, passed a law to hang any "Carib" brought to the Colony. In , the Caribs are dignified and industrious farmers who continue to manufacture many of their traditional crafts. Steadily regaining their culture, they are the principal producers of Dominican bananas, coconuts (copra), and passion fruit on the 3,700 acres Carib Reserve. 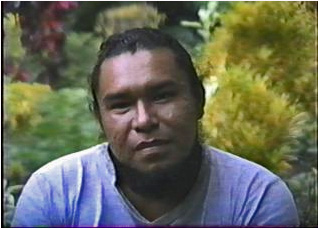 Above: Chief Irvince Auguiste (1992) of the Carib , (Pronounced: Domi-nee-ka as opposed to the country that shares Hispaniola with .To see a 1992 interview with the chief, go to: https://www.youtube.com/watch?v=sFnDZSToAW4&t=193s


SOME CARIBBEAN CURIOS THAT SURVIVED

All rubber-ball games played on a court came from the Olmec invention. Two teams face off together, one North and the other South. The heavy ball is kept airborne by the hips. Among the Maya stone hoops were placed on the East and West walls of the stadium (like basketball).Hitting the ball through the hoop won the game. Among the Aztec the ballplayers were warriors prepared to die by sacrifice to become messengers to the gods.The airborne ball represented the sun and each team may represent positive or negative forces. The game was a form of divination. Among the Aztec more ball-courts were built during times of strife.Betting was true in the Caribbean and . Lords lost or won kingdoms there. In the  both women (using a bat) and men played separate games that were more social. Beautifully carved stone belts and elbo protectors were worn. Agility was premium. The Ball Game survives in  among the Maya.