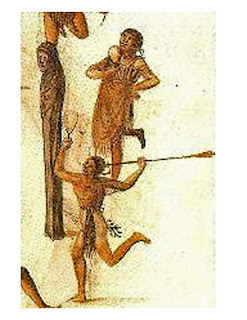 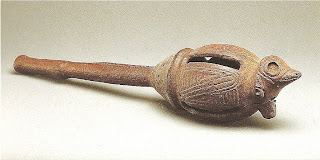 conquistador /kon keésta dawr/ n. (Mid-19th C via Spanish) 1. a Spanish conqueror or adventurer, especially one of those who conquered , , and in the 16th century –ibid.

Writers often make statements about the conquest of the by foreign powers as if the episode in the history of this hemisphere was a deed in finality. They make the occurrence seem as if everything Native came to an abrupt end after dates like Columbus’ 1492 Taíno Caribbean encounter, Cortez’s 1519 entry into the Aztec capital and Pizsrro’s 1532 Inca Empire capture.

The word conquest implies many things. It is especially used in the to mean the total takeover of many indigenous American societies and peoples. Does conquest mean that all cultural and genetic traces of the conquered are obliterated? Do conquered people ever totally submit to the oppressor’s will? How long does a conquest last? The Spanish who themselves had been conquered by Moors from Africa who had ruled over most of their peninsula for nearly 800 years, became the major oppressive force in the Americas for almost 400 years. In psychological terms, in the , the Moorish “abused Spanish” became “abusers” of the indigenous Americans. By January of 1492, the Christian Spanish had just thrown off the yoke of the Islamic Moorish empire via the Reconquista (reconquest) when they began their own wars of terror against the populations in the . had initiated the move in the in October of the same year. Ironically, Spanish control over the also ended at their starting point in the Caribbean’s and at the hands of the Americans in the1898 Spanish-American War. ’s domination in the had ended where it had begun.

“Whether it is the Normans in England, the Chinese in Tibet, the Germans in Poland, the Indonesians in West Papua [New Guinea], the British and Americans in North America, the claiming of other people’s land and supplanting of one people by another has shaped the history of societies from the ancient past to the present day.”— Conquest: How Societies Overwhelm Others by David Day

Since the Romans conquered , are the English still Romans? The English threw off the Roman yoke and re-established their cultural continuum, albeit retaining many Roman influences. A notable example was the desire to do the same and to travel the world in attempts to overwhelm other societies. The “abused” became the “abuser”. What became “” may have been biological amalgamation, yet the indigenous people of those small isles retained their Anglo identity, culturally and genetically. Although we would not dare to challenge an Englishman about his heritage, contemporary writers dismiss a similar notion of Indigenous American identity. Are the , South, Central and North American populations Spanish or British?

It is often parroted that “the Taíno disappeared soon after” the conquistadors followed into the after 1492. The same notion is commonly ascribed to other indigenous American civilizations. These societies, like the Aztec and others have been psychologically relegated to the “disappeared”. Yet how complete is this notion of total evaporation?

After Conquest, then what?

The series of events after a conquest have differed around the world. In the , conquest was followed by colonialism, then independence from the European powers. However, according to David Day, the move to supplant the Native populations continued under the newly freed governments. “From the [Indian’s] perspective, the nature of the American colonists had not changed. Europeans came to to establish themselves on territory owned by Indians and they continued, after independence, to pursue that aim clear across the continent.” This approach to obliteration of Native culture and replacing it with a foreign one continues at present in this hemisphere. Today, there is a struggle by indigenous Americans to maintain and renew their heritages, in spite of an educational system that has worked to promote “dead” Indians over living descendants. Throughout the the resurgence of Native pride is one weapon against an apathetic educational system.

Many cultural practices that we observe among the peoples of the are part of an ancient indigenous continuum that is often misidentified. For example, in the article : New Notes about Taíno Music and its Influence on Contemporary Dominican Life by Lynn Guitar, the author suggests that the Dominicans on that Caribbean island half of Hispaniola shared with Haiti, “have a passion for music and dance since the Colonial Era when you could dance in the churches streets and public plazas”. Many of these Dominicans are the descendants of the indigenous peoples of Haiti Bohio (meaning “high ground home”) or Quisqueya (meaning “mother of the earth”) that was the center of the ’s Taíno civilization. They were the first to be conquered by the Spanish arriving in the .

“Music played a highly significant role in both the daily and ritual lives of the Taíno, as we call the indigenous peoples of Hispaniola and the other islands of the Greater Antilles, although there were actually several different groups of indigenous peoples living here when Christopher Columbus arrived and dramatically changed not only their names, but the course of their history. The Taíno used music to help make mundane work more bearable, to help them remember and recount their history, to celebrate special occasions, and to communicate with their spiritual guides, their cemíes, to gain their help in healing, for protection against destructive natural forces such as hurricanes and earthquakes, to ensure rain when needed, good harvests, hunts, and fishing expeditions, and other necessities of life. In fact, music and song were so important, that one of the most valuable gifts one Taíno could give another was a song.

Maracas are rattles, most frequently today made out of small hollowed-out gourds (higüeros) with stick handles attached, but sometimes carved out of wood. The main difference between original Taíno maracas and modern ones is that the original ones, at least those used by the behique [shaman] for religious rituals, appear to have had one large ball of wood inside—in fact, the maraca was carved out of one piece of wood, handle and all, with the ball of wood that produces the clicking sound carved out of the inner core of that one piece of wood, through open slits that allow the sound to come out. Today’s maracas have no slits; they are left enclosed, with many small stones or seeds sealed inside the empty gourd before the handle is attached. The maracas used by Taíno musicians may have been more like the modern ones, and they appear to have used two at a time, like most modern percussionists. The behique used only one maraca, not two, and he played not by shaking it, but by hitting it against his other hand.” -- Lynn Guitar

Using music as an example, recognizing and understanding Native American Cultural retentions had been difficult for the conquerors. For example, Lyn Guitar stated that “Like the music of most Asian cultures, Amerindian music is also typically pentatonic, meaning based on five notes, instead of the typical 8-note base of most European music. ‘What [really] makes the Native American scales sound so alien [to European ears] is that the pitches of the five notes are seemingly chosen at random.’ The pitch patterns appear to have varied from tribe to tribe, village to village, family to family, even from person to person, so they were no doubt understood by the Amerindians as a means of kinship or geographic identification, just as indigenous peoples used specific designs for ceramics, textiles, and other decorated objects as identifiers of artists, families, and nations from particular regions.”

It is not surprising that even in today’s societies in the we find it difficult to recognize and appreciate the very strong cultural retentions that derived from our indigenous American heritage. We in the may be more “indigenous” than we think. The key to this realization is through continued education about those things that we have retained from our Native sisters and brothers.

New Notes about Taíno Music and its Influence on Contemporary Dominican Life (http://www.centrelink.org/GuitarTainoMusicEN.html)