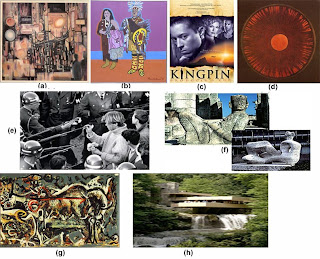 Influences of Amerindian Art
Writers have often applied the two words above from the dictionary to the indigenous peoples of the Americas, Asia, Africa and Polynesia and some modern artists influenced by these cultures. The dictionary describes art as “the creation of beautiful or thought provoking works, e.g., in painting, music, or writing [etc.].” Quite often historians have stated that many non-Western societies did not have a name for art, yet Mesoamericans did. In art history contexts, anthropologists, art historians and other writers applied the words “primitive”, “naive”, “Native”, and “tribal” to artistic expressions by some African, Asian, Polynesian, and Native American art forms. In the book Native Moderns: American Indian Painting, 1940-1960 author Bill Anthes stated that even well meaning writers like Jewish American 1940s New York art critic and painter Barnett Newman used the word “Primitivism” to describe Native American-influenced art. Newman promoted the conscious incorporation of Native American artistic aesthetics in creating the new form of visual expression, America’s Modern art movement.

In the 1940s some American artists, especially those with recent European immigrant roots broke with Europe, especially Paris, as their main inspiration for creating avant-garde art. Earlier, in the 1800s, French artist Paul Gauguin had gone to Tahiti for his artistic inspiration where he reveled in the “purity” of Polynesian culture and broke from European realism. In the early 1900s, Pablo Picasso and other Europeans looked towards Africa as a model for their artwork. Native American art and architecture influenced both American (mainly centered in New York) and European artists. This New York centered art movement became the basis for Abstract Expressionism. However, this cross-cultural influence was not a one-way street. Upon their arrival in the Caribbean and later in “Terra Firma” as they called the American mainland, the Spanish employed indigenous artists to create works for their expanding empire. The Spanish émigrés used ornately decorated stone pillars known as the “Seville carvings” for buildings in their Jamaican capital Santiago de La Vega, now Spanish Town in the parish of St. Catherine. Historians believe that the indigenous Taíno stone carvers made the elaborately decorated architectural columns for the conquistadors. In Terra Firma, the Spanish also used the talents of indigenous artists and artisans for the construction of religious and governmental buildings.

Later, in North America “between 1940 and 1960, many Native American artists made bold departures from what was the traditional style of [American] Indian painting.” Some of the better-known 20th century pioneering modernist Native American painters were José Lente and Jimmy Byrnes (Pueblo), Patrick DesJarlait and George Morrison (Ojibwa), Dick West (Cheyenne) father of Rick West, past director of the National Museum of the American Indian, and Oscar Howe (Dakota). “Many anthropologists, archaeologists, and art historians are also now studying modern Latin Native American cultures for vestigial manifestations of or similarities to pre-Columbian civilization.” (Encarta Encyclopedia online article on Pre-Columbian Art and Architecture).

Toltécayotl
What did pre-Columbian people of the western hemisphere think about the discipline that some cultures in the eastern hemisphere called art? The book Esthetic Recognition of Ancient American Art by George Kubler includes the 1500s investigative work with the Aztec/Mexica (Nahua) people of Mexico conducted by Franciscan missionary Bernadino de Sahagún. In Sahagún interviews, he asked these indigenous American informants their opinions “on the historic origins of sculpture; on the ancient estimation of artists; and the kind of recognized artists.” These Nahua-speakers considered the older Toltec civilization in the Valley of Mexico at Tula, flourishing before A.D 1300, as the originators of toltécayotl, or “artistry”. They called practitioners of these revered art forms of sculpture, painting, pottery, and metalwork toltécatl. The informants said that toltécatl had a “marked individual identity, a striving for excellence and as being of moral worth”. For example, “teaching the clay to lie” was one of the metaphors that these Mesoamerican civilizations applied to ceramics or pottery.

Judging by the beauty of Native American regalia on today’s powwow circuit and the variety of artworks at Indian Market in Santa Fe, New Mexico, art has always been and continues to be an integral part of American Indian life and practice. The following proves my point. I am a visual artist who married into a family of Native American artists. In my wife’s indigenous American family, more than 29 of them are artists who have both worked and have gained recognition in the various fields of creative expression. For starters, my wife’s mother is a noted painter, ceramist, and sculptor whose painting is in the permanent collection of the National Museum of Women in the Arts in Washington, D.C. Some of her siblings were artists and accomplished musicians. My wife is a painter, sculptor, designer, actor, and storyteller. One of her sisters is a noted medical illustrator/administrator. Her two brothers are musicians; one was the lead guitarist for Mandrill, the internationally famous funk band formed in Brooklyn, New York in 1968 by brothers who were born in Panama and who grew up in Bedford-Stuyvesant. Her second brother is a singer/composer and bass guitar player. Her other two sisters received degrees in drama and music. A cousin with a surname (like my mother-in-law’s) from Virginia’s Pamunkey people was a Washington Post writer turned Hollywood screen writer/producer of film and television. A maternal cousin’s first degree was in art therapy and is now a PhD professor/writer/photographer. A late paternal Tauxenent cousin, a newspaper photographer detailed to the White House by the Washington Times and Los Angeles Times, was a noted Pulitzer nominee for a famous Vietnam-era demonstration photo. Another maternal cousin is a noted retired photographer/editor for the Washington Post. Other cousins, nephews and nieces continue to be involved in the performing and visual arts during their lifetimes. From the second generation, our middle son is a lawyer for New York City’s Volunteer Lawyers for the Arts (VLA). Our youngest son, who has also finished law school, has acted in films, shares a passion for screenwriting with his older brother.

Indigenous America aesthetics and Modern American Art of the 20th century
Whether we know it or not indigenous American art has deeply influenced all of our lives. The conscious influence of Amerindian visual aesthetics, beginning in the Caribbean, has been a driving force in my own works. I have come to learn that these indigenous American influences began early in the post-Columbian history of this hemisphere. Art historians have amply documented the similar profound indigenous American aesthetic influences on abstract art movements. In the book American Indian Contributions to the World: 15,000 Years of Inventions and Innovations, Emory Dean Keoke and Kay Marie Porterfield stated on page 1 under (ca.1930-present) North American, Mesoamerican, South American Andean cultures:


English artist Henry Moore’s abstract statues, one of which graces the entrance to the East Wing of the National Museum of American Art in Washington, D.C., is a Modernist reinterpretation of Mesoamerica’s indigenous sculpture. Similarly, ancient buildings from America’s southwest influenced noted architect Frank Lloyd Wright whose work in turn inspired other architects. The permeating influence of indigenous American art and aesthetics continues around the world today.

Some types of visual arts

For examples of works by select persons in this blog, click on to the following website pages: